This article contains spoilers. Proceed at your own risk.

In a relationship with June Parker

Jack is a brave person, who sometimes acts too fearlessly and rash. He has a great sense of justice and doesn't like to back down on it, for example he is decidedly against complying with Kimiko's kidnapper even when his fiancé, Marie, asks him to.

Jack values family, and he worries about his relatives, however, he doesn't visit his parents and grandmother unless there is an occasion. This might be because Jack doesn't value his family's upperclass lifestyle and political ambition the same as them, which seems to put some distance between him and his family.

Jack's star sign is Taurus. He likes romantic gestures, taking to the sky and anything chocolate. Jack dislikes dishonesty, cheap whiskey and neckties. What makes him memorable is "that twinkle in his eyes and his way with words".[1]

Jack Hayes was born as Avery Jackson Hayes III as the son of a prominent senator. Avery Hayes' and Tippi Hayes' marriage was arranged by Jack's grandmother Vivian Hayes, who wanted to make sure to add a valuable connection to this politically ambitious family.

Jack soon decided to not follow the footsteps of his ancestors and became a pilot. His frequent visits to his maternal grandparents' farm as a child influenced his decision.

Jack fought as a pilot during World War I. After the war ended, he suffered a trauma, which led to him and June breaking up. Most of the time he drowned his pain in alcohol.

Shortly after the war ended, Jack and June met in Paris and started a relationship that didn't last long. They remained best friends, but his love for her never died. Nevertheless, he supported June's marriage to Nicholas Bennett and comforted her after her divorce.

After Clare and Harry van Buren's death, Jack confesses his feelings for June which remains unanswered by her. Even months from that she isn't aware of her own feelings for Jack. This causes her relationship with David West to break down. David accuses June of still being in love with Jack, which she then finally acknowledges.

Right after Marie and Jack break up, June still struggles to tell Jack about her feelings, even though she is aware of them by now. So the two part again. After she gets shot by a hired killer and almost dies she doesn't hesitate any longer. She confesses her love to him and they get together for "a serious relationship."

Jack began a relationship with Marie Hamada, an American-Japanese reporter, while June was dating David. Jack and Marie met when Marie covered the homicide of Ben Field, for which Avery Hayes was a suspect. They quickly grew closer and soon got engaged. Their wedding was planned to take place in Tokyo but they agreed to brake up shortly before the wedding. Their break-up was provoked by Tetsuya, a childhood friend of Marie who's deeply in love with her. He informed a crew of reporters to take photos of Jack and June barely clothed after breaking out of a sauna. This led Marie to believe Jack cheated on her so she in turn cheats on Jack with Tetsuya. After Jack learns of her unfaithfulness they decide to break up quite amicably.

Volume 1: Jack is an adult male with a muscular build. His brown hair is parted on the right side and above the shoulder length. He has a mustache and beard. He usually either wears an aviator jumpsuit or shirt and pants. 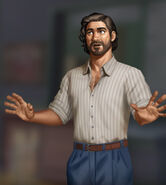 Jack's first appearance happens in Level 21, Vol. 1, when June seeks him out to fly her to Cuba to find the kidnapped Virginia.

Community content is available under CC-BY-SA unless otherwise noted.
Advertisement